On Thursday, President Donald Trump tweeted about a dog used by United States special operations forces in a raid  This raid led to the death of Islamic State leader Abu Bakr al-Baghdadi in Syria. He said the dog would leave the Middle East to come to the White House next week and declassified the dogs name.

After a fake image from the website The Daily Wire was shared showing Trump putting a metal around the dogs neck, the president shared a tweet. He said the reaction was “very cute” but the “live” version of the dog “Conan” will be leaving the Middle East next week. The dog will then be visiting the White House!

Thank you Daily Wire. Very cute recreation, but the “live” version of Conan will be leaving the Middle East for the White House sometime next week! https://twitter.com/realdonaldtrump/status/1189601417469841409 … 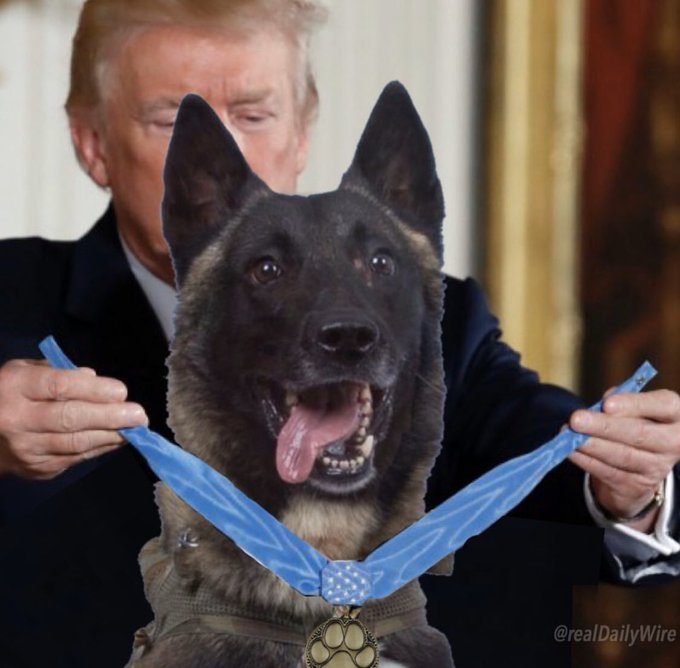 This was the first time any U.S. official had confirmed the name of the dog. The dog ia a Belgian Malinois that is named Conan. This is something military officials had been declining  to do in recent days. They had been citing it was because of security reasons.

On Monday, Gen. Mark Milley, chairman of the Joint Chiefs of Staff, told reporters at a Pentagon briefing ,that the dog was “slightly wounded and fully recovering.” Milley said that the dog was returned to duty and it was classified so he would not be releasing the dogs name or any information about the dog.

(MORE: What we know about the military dog injured in the al-Baghdadi raid)

A few more details were released about the dog at a press briefing at the Pentagon on Wednesday. It was learned that the dog  has participated in 50 combat missions and served for 4 years.

On Sunday, Trump called the dog “beautiful” and “a talented dog”.