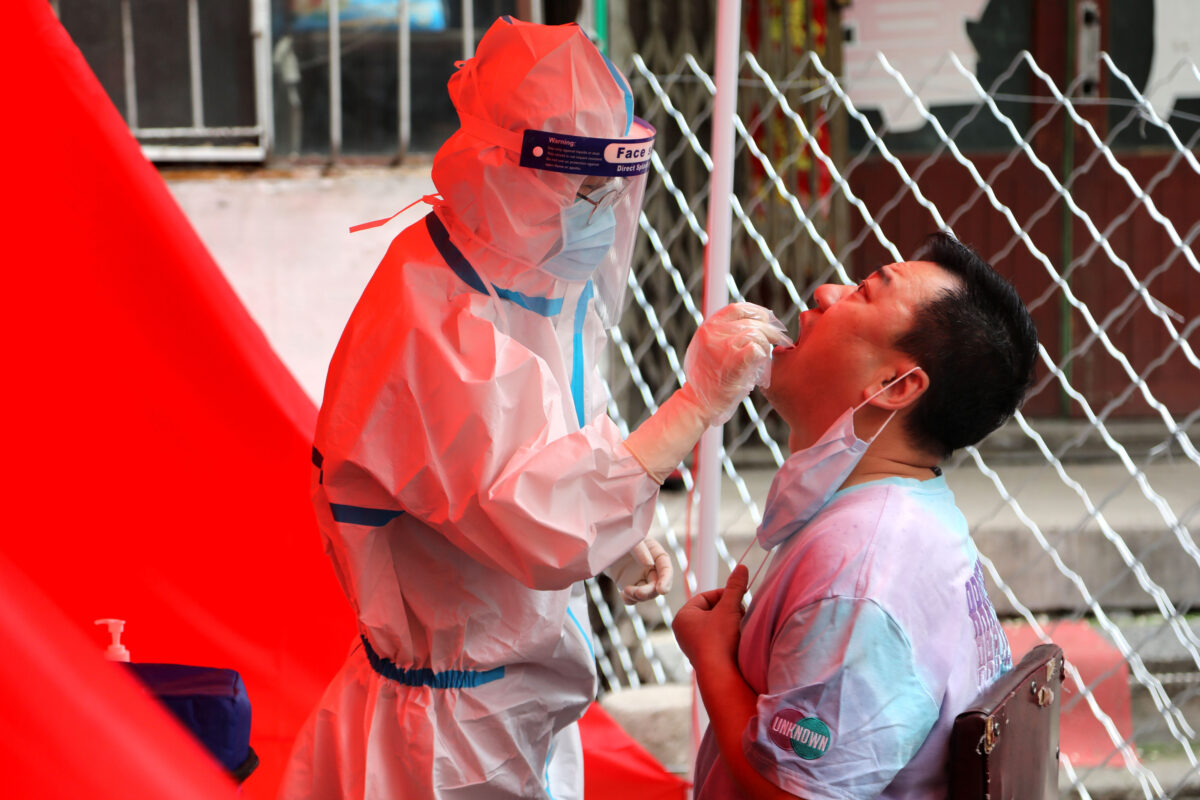 Chinese authorities have not announced new updates about the CCP virus outbreak in Harbin city, northeastern China since an upsurge in April .

Local patients recently told The Epoch Times that they knew at least five people who have passed away from COVID-19 , the disease caused by the virus— which have not been announced by authorities. At one hospital, 30 patients haven’ t yet fully recovered and are being isolated at the facility, one interviewee said. They themselves were also under treatment.

But authorities claimed the last COVID-19 patient was discharged on May 16 from the hospital where he was being treated.

“ We are very anxious, but the doctors said they have no solutions. They didn’ t give us any medicine, and are hoping our bodies recover by ourselves, ” Zhang Ling, a Harbin patient who was diagnosed on April 12 said in a recent interview.

The CCP (Chinese Communist Party) virus , commonly known as novel coronavirus , first broke out in central China’ s Wuhan city in late 2019, and soon spread across China and the world.

Since early April, after a brief period in which most regions of China reported little to no new infections, second wave outbreaks have occurred in several Chinese provinces, including Heilongjiang, where Harbin is the capital.

Li Ping, Zhang Ling, Zhou Yang, and Mrs. Wang spoke about their experience becoming infected after visiting the Harbin No. 2 Hospital from April 2 to April 6.

They were healthy when they went to the hospital, but they contracted the virus while in the facility taking care of their spouses who were being treated there for non-virus related diseases.

According to Harbin authorities, all patients who were infected at the No. 2 Hospital had contracted the virus from a 87-year-old COVID-19 patient surnamed Chen who was staying on the 17th floor.

The four interviewees’ spouses were also on the 17th floor. Three were also diagnosed with COVID-19, and two died.

Li Ping and her husband, both in their late 50s, had stayed at home all winter in order to avoid contracting the virus. “ My husband had taken medicines at home for months, ” she told the Chinese-language Epoch Times on May 28.

On March 29, Li’ s husband felt very sick and was sent to the No. 2 Hospital by ambulance. The doctor told Li that her husband may have roughly a month left to live.

At the time, authorities had not reported any new infections for over a month. Li and her husband thus did not feel concerned.

On April 6, Li’ s husband suddenly lost consciousness and died on April 8. Staff did not tell Li and her husband of the risks of being infected with CCP virus until April 16.

Li had returned home on April 8, and arranged her husband’ s funeral on April 10. Two days later, Li went to the hospital again to pick up their belongings. But she noticed that all the doctors and nurses on the 17th floor were different from the ones who treated her husband.

On April 14, Li started to have a fever. She was diagnosed with COVID-19 on April 16, after her lungs were damaged by the virus. Her sister and daughter-in-law were also later diagnosed. Li said they contracted the virus from her.

Li has since been discharged from the hospital and being isolated at a hotel when she received the interview by phone. She believes her husband died of COVID-19, though the hospital never tested him, because he died before the doctor’ s estimate.

Zhang Ling’ s husband had a tumor. On April 9, the doctor said her husband recovered very well and could be discharged in two days. However, the husband started to develop a fever on the evening of April 10.

“ All nurses and their directors were gathering in the office. Nobody took care of patients. A male nurse told me that they would leave the hospital the next morning, ” Zhang said. “ On the morning of April 11, all doctors and nurses were changed up. The newly arrived medical staff all wore protective suits. The previous ones didn’ t wear them, ” she said.

On April 12, all patients on the 17th floor were moved to other floors. Zhang and her husband then took nucleic acid tests. They were both positive.

Zhang also spoke about the case of Mr. Wang, who stayed in the same hospital room as her husband. “ Wang, his wife, my husband, and I were diagnosed with COVID-19 and isolated at the Harbin Infection Hospital… Mr. Wang died of the virus on April 29. Mrs. Wang is being isolated at the hospital until now. She is very sad, ” Zhang said.

Zhang said her husband became very sick after becoming infected with the virus. She, her husband, and Mrs. Wang are all currently at the Harbin Infection Hospital.

The Epoch Times could not independently verify the information.

Zhou Yang’ s wife has been receiving treatment at Harbin No. 2 Hospital for dementia since March 28. On April 10, Zhou saw that all medical staff were in a state of panic in the evening, but he had no idea what had happened.

“ On the evening of April 11, they performed nucleic acid tests on my wife and me as well as other patients  in the same hospital room and those who accompanied them, ” Zhou said . “ My wife and another dementia patient Gao were diagnosed on April 12. … I was diagnosed several days later. ”

Zhou and his wife have since been transferred to the Harbin Infection Hospital.

When contacted by The Epoch Times, the reception desk of the Harbin No. 2 hospital said it was not taking in patients and had been under lockdown. “ I don’ t know when our hospital will reopen. It’ s a decision that will be made by upper level leaders. ”

The Epoch Times previously obtained a series of internal government documents showing that medical staff at the hospital had been infected . The documents also showed that Harbin authorities were underreporting the number of infections.

Zhang said 30 patients were being treated at the Harbin Infection Hospital by the end of May, but Heilongjiang authorities announced zero new patients in the province on May 17 and every day since.

Heilongjiang also announced its latest COVID-19 death was on Feb. 27. Since then, the death toll in the province has stayed the same, at 13 people.

But Li Ping’ s husband and Mr. Wang, as well as a relative of 87-year-old Chen, and two other patients told The Epoch Times that their loved ones died of the CCP virus in April and May.

Panic and Loathing in La